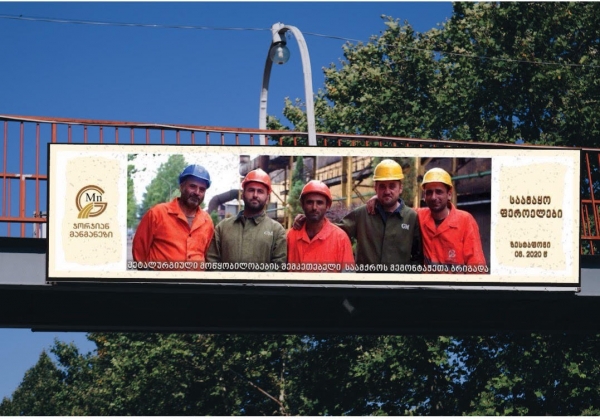 Georgian Manganese has again named the best workers of the month of July: their faces are displayed on billboards in Chiatura and Zestafoni. GM has set a tradition of naming the best workers of the month and July has marked five miners for overfulfilling the working plan: Beka Gaprindashvili, Vladimer Dogadze, Platon Macharashvili, Sulkhan Guruli, and Kakha Gaprindashvili.

As for Zestafoni Ferroalloy Plant, the title of the best working team of the month was given to the brigade of the metallurgic equipment workshop for the best planned renovation works: Mirza Tsitsilashvili, Giga Saralidze, Luarsab Kakhniashvili, David Tabagari, and Vladimer Basilashvili.

"Establishing a new tradition of naming the best team of the month is a way of saying thanks to our workers. There are so many professional people working for the company and our success is largely dependent on them. We appreciate the work of all the people, who take responsibility and contribute to development of our country," said Merab Lominadze, GM director.

"I believe that this is a very good tradition. Miners are now more diligent and goal orinted. They have overfulfilled the plan and have become the month's best team," said Beka Gaprindashvili, the Mgvimevi mine team leader.