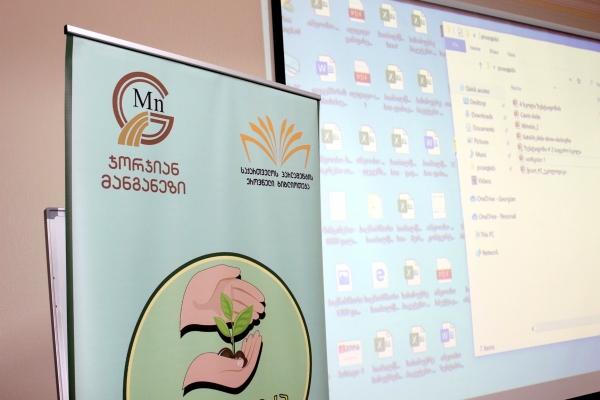 Ecologica-2019, the intellectual and educational youth project initiated by Georgian Manganese, came to completion last weekend in Zestafoni, with teams of 9-11th graders from Chiatura and Zestafoni regions presenting their final winning projects.

Special jury, consisting of mayors of Chiatura and Zestafoni, deputy director of the National Parliamentary Library of Georgia, a TSU professor, a photographer and a journalist, has chosen three best projects prepared by school children from the Chiatura Public School #2, Zestafoni Public School #4, and Chiatura “Katskhi” School.

Georgian Manganese has allocated 12,000 lari for the winners’ fund.

“We are glad to see that this project has gained such positive feedback. Ecological projects are called to deepen knowledge of the young generation. Our company is ready to lead similar environment-related events on a regular basis. School children from Zestafoni and Chiatura take an active part in these events, which demonstrates real interest to this topic among the young people in both regions, which makes us want to continue youth education on these issues,” said Temur Khonelia, Georgian Manganese’s administrative director.

The aim of Ecologica-2019 was a project to make set up greenery at the school yard. Young people were supposed to present and implement it themselves at their own school. The project started on September 25, 2019 and involved around 70 school children from 9-11th grades from Chiatura and Zestafoni municipalities.

The first stage of the project took place in the form of intellectual game “What? Where? When?”, checking pupils’ knowledge of environmental issues. The second stage was a training session led by a professional trainer Rusudan Asatiani from the Georgian United Association of Libraries. She helped school children to write their own project on school yard landscaping. Ecologica-2019 has gained support from both regions’ municipality leaders, “What? Where? When?” intellectual club, the National Parliamentary Library of Georgia, and the Georgian United Association of Libraries.